The website of the FMF may use cookies to improve the user experience and track viewing statistics. No personal information will be stored. By using this website you are implicitly agreeing to this.
Hide this message.

Born in Groningen on April 20 1922, Hendrik de Waard attended the City Gymnasium from 1934 to 1940 and studied at the University from 1940 till 1949, majoring in Physics and Mathematics. He started research in atomic physics in 1942, studying scattering of fast electrons in a mercury vapour and during the war and attempting after 1945 to show the existences of polarisation of electrons by double scattering in a mercury vapour beam.

In 1948 he switched to nuclear spectroscopy in which field he obtained his doctorate in 1954 on a thesis entitled "Scitillation coincidence studies of the decay of 181Hf and 193Os and the isomerism of odd proton nuclei". For this work he also developed methods for the measurement of short nuclear lifetimes. During this period he also assisted at the laboratory courses for Physics majors and taught electronics. He continued his work in nuclear spectroscopy at the Nobel Institute in Stockholm and at the Fysikum in Uppsala in the group of Prof Kai Siegbahn and Dr. T.R. Gerholm. 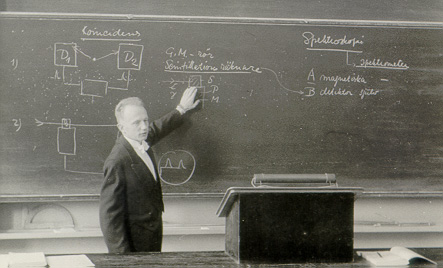 When Tor Ragnar Gerholm got his doctoral degree in Uppsala in 1956, Hendrik acted as an opponent arguing in Swedish.

An important result of his work there was the discovery of negative parity states in 175Lu and 177Lu that could not be explained in terms of the shell model as it was known at that time but it fitted well in the new model of S.G.Nilsson (Lund) for strongly deformed nuclei. In Stockholm, he also developed a method for stabilizing scintillation spectrometeres by feedback of the fluctuating output signal that became widely applied all over the world.

Hendrik de Waard returned to the University of Groningen in 1955 and obtained a lectorate there in 1956 in experimental physics in 1956 and a full professorate in the same discipline in 1958. In 1957, he started, together with Dr.J.Poppema and Drs. J. van Klinken ,also in Groningen, on the measurement of the polarisation of beta particles, expected on the basis of non-conservation of parity in beta-decay.

This polarimeter designed in the Natuurkundig Laboratorium (Groningen University) was used to measure the longitudinal polarisation of beta-decay of 60Co, 32P, and 170Tm, 1957.

The first - positive - results were obtained within a few months. This work was extended and continued by Dr. J. van Klinken. Other work in nuclear spectroscopy was continued until about 1970 resulting in about 25 publications and a number of doctoral theses. During a year as a visiting professor at the University of Illinois, in 1962, he started with research in recently started field of Mössbauer spectroscopy, inaugurating the case of the 27.8 keV level in 129I. The spectra of a number of iodine compounds were satisfactorily interpreted. In particular, the connections between isomer shift and quadrupole coupling was established. Since then it has always played an important role.

In 1965 Dr. S.A. Drentje and Hendrik de Waard started Mössbauer investigations of sources made by ion implantation of radio-active isotopes in metals. This work turned out to be very fertile; it has continued up to the present time and extended also to work on impanted semiconductors. One of the surprising results was that despite the heavy damage impart to be penetrating ions to the metal often most of the implanted ions land in regular substituional sites of the metal. Investigations of implanted sources were later also carried out for the techniques of perturbed angular correlations (Dr.F. Pleiter) and nuclear orientation (Prof.L. Niesen). An important result of these measurements was a better understanding of the role of vacancies for particular annealing stages. Another special effect that has been explored is the formation of isolated molecules in metals that may occur after implantation of more than one different imput. Real isolated chemical bonds may be formed, as evidenced by the Mössbauer spectra of the atomic complexes formed. De Waard further investigated surface magnetization of iron foils with the opto magnetic Kerr effect, Mössbauer spectrocopy and perturbed angular correlation. Here, a hitherto unobserved phenomenon was observed: the surface only becomes magnetized after the bulk magntization in an external field reaches more than 75% of its saturation value. The phenomenon can be explained from the stability of closure domains at the surface.

Together with Prof.Richard Frankel, a colleague at the California Polytechnic State University, who had already carried out various investigations in the field of magnetotactic bacteria, and a student from Groningen, Ms.I. Penninga, Hendrik de Waard measured the magnetization curves of several different types of magnetotactic bacteria in the period 1994-1996. These bacteria contain permanent magnetic ferritic or sulphidic cores built up of separate grains contained in submicroscopic vesicles. Depending on the type of bacterium that can be demagnetized in pulsed fields and subsequently remagnetized in the opposite direction.